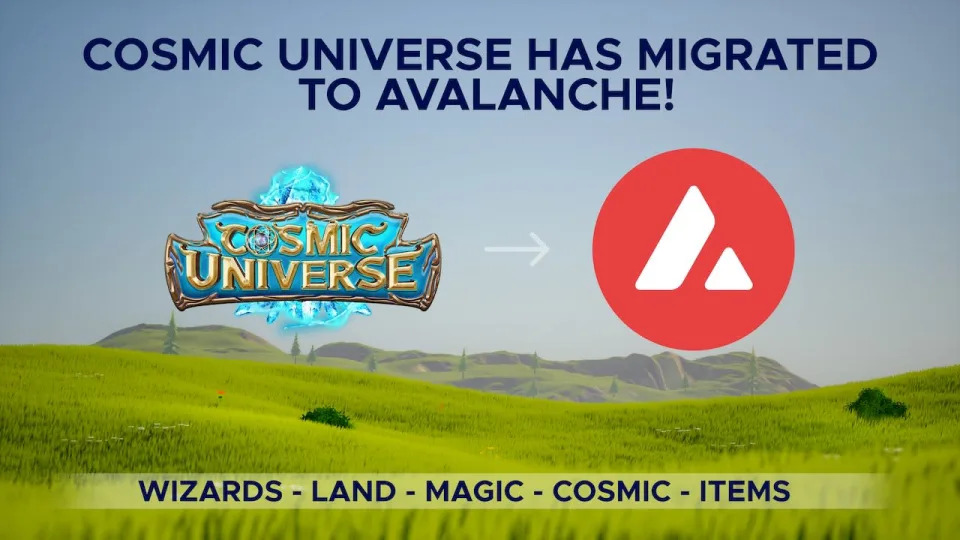 New York, NY, United States, 27th Jul 2022, Blockchain MMORPG Cosmic Universe announced that it has just successfully completed a full migration from Harmony to Avalanche. In talks with Ava Labs since March, the initial planned cross-chain expansion had turned into a full migration after a $100M Horizon Bridge hack on Harmony had occurred that shook the confidence of many projects on the Harmony blockchain as to its long-term viability as an ecosystem for games like Cosmic Universe. Cosmic Universe has successfully completed its migration to Avalanche to bring the fantasy-themed worldbuilder and MMORPG to the growing Avalanche ecosystem.

When speaking on the migration to Avalanche, Cosmic Universe founder Wizzard Blizzard said,

“We look forward to introducing our unique blockchain worldbuilder and questing MMORPG to the Avalanche community. The fast transaction speed, bolstered security, and increased developers tools, along with a thriving community and low transaction costs, have all made Avalanche the obvious choice when it came to selecting which blockchain we were to migrate to. This full migration to Avalanche is a major step towards ensuring Cosmic Universe becomes a leader within the world of blockchain gaming.”

As of July 2022, anyone who owns Cosmic Universe assets, including MAGIC, COSMIC, and NFTs, can quickly and easily transfer their assets from Harmony to Avalanche using a custom bridge developed by the project’s developers. Additionally, anyone joining Cosmic Universe now can also join the Bank, which is a form of single staking for MAGIC. There are also four yield farms that can be joined on the Cosmic Universe marketplace, with MAGIC rewards earned that are 100% unlocked.

Players looking to get in early on Cosmic Universe can join the Character Staking program, where Cosmic Wizard NFTs can be staked and upgraded when it comes to Profession skill levels. Each playable character in the game will get to have up to three Professions, each able to reach a Skill Level of 200. Prior to the game’s full release, players have the opportunity to upgrade to a Skill Level of 40 per Profession for up to two Professions.

Cosmic Universe aspires to be a leading MMORPG within the blockchain gaming arena, leveraging the benefits that blockchain technology has to offer to enhance the traditional MMORPG gaming experience. The game’s Pre-Alpha is slated to be released in Q3 2022, followed by the Alpha and Beta, with the full release launching in 2023.

Besides launching the MAGIC Bank first on Avalanche, Cosmic Universe is also releasing its second playable 10K NFT character collection, Cosmic Elves, in August 2022. Discount tickets providing discounts between 5% and 20%, as well as a guaranteed mint spot, are mintable right now on the game’s marketplace. Modeled, rigged, and animated completely within Unreal Engine 5, Elves will have over 200 traits spanning across male and female characters and four skin tones. This character NFT collection will be the only one released in 2022, taking its place alongside Wizards, originally released in 2021 as 2D gamified avatars and more recently upgraded into complete 3D models.