Karla Heisele Cubilla, a current McGill University undergraduate student and former VP Student Life at McGill’s University Student Society has become one of the latest adult content creators with Playboy and Only Fans. This 23-year-old young woman pursuing a bachelor’s degree in psychology at Canada’s most reputable higher education institution incites scandal and notoriety amongst her peers, and certainly never thought it would be anything she would take seriously or develop a passion for. 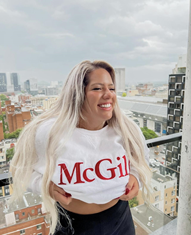 A simple suggestion (“you should start an OnlyFans”) taken almost offensively, led to a new career path that has launched her into the local sex industry in Montreal. Almost as a test for herself, it started out “soft”, creating an account to post artistically tasteful photographs of her medically enhanced breasts to even see if she could generate any kind of engagement let alone a loyal follower base much less a steady and consistent income. She thought to herself: “let’s do an experiment”.

In little more than 7 months of having begun this pursuit not only has Karla, now known professionally as Karlita The K, amassed an ever-expanding list of devoted subscribers on OnlyFans, organically grown her following on both Instagram and TikTok, and even landed the playboy bunny title. She has also generated consistent word of mouth among the Montreal community of sex industry workers which has led to her participation during Montreal’s Fetish Festival and opened more collaborative opportunities to expand her breadth of content to now include intricate and intentionally explicit video content.